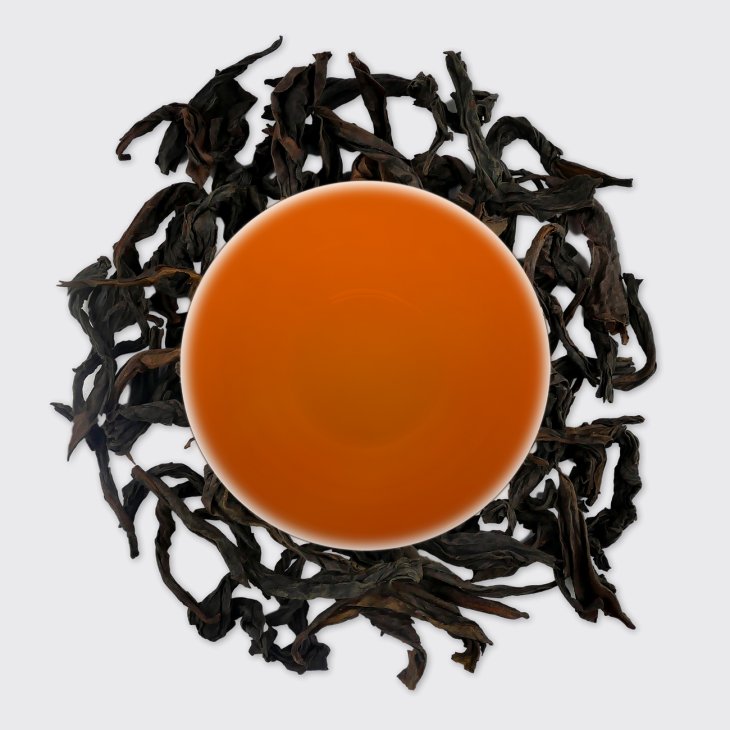 There is much controversy over the lineage of Da Hong Pao (Big Red Robe). The original six mother plants (over 300 years old) still grow in Wuyi but they are protected by the Chinese Government and almost never picked but dutifully cared for. In the 1980's cuttings of these bushes were made for genetically identical asexual propagation and since then they have spread around Wuyi mountain. So there are 1st generation bushes, 2nd generation bushes and so on.

So it is common knowledge that in order to drink pure Da Hong Pao you should be seeking tea grown from these bushes. Of course factors such as the area, soil, microclimate will all play their part in the quality of the tea but pure Da Hong Pao should supposedly be from these 'Qi Dan' bushes.

Enter the marketeers. Knowing that the original Da Hong Pao bushes were commanding huge prices (around $1m per kg) and that there was a limited quantity of the Qi Dan clones, many sellers began blending other Wuyi varieties together to create an approximation of the pure Da Hong Pao. It is thought that around 80% of the Da Hong Pao being sold is blended tea usually with a combination of widely available Shui Xian and Rou Gui (sometimes mixed with a little Qi Dan). Therefore Da Hong Pao became a name associated with a style of tea rather than a strict variety. Depending on the producer and the leaves used in their blends you can find delicious Da Hong Pao and a lot of pretty ordinary Da Hong Pao.

So that's all clear right? Apparently not!

In the 1950's a scientist called Yao Yue Ming was instructed to analyse the Da Hong Pao mother bushes. He, along with other scientists took cuttings of  the mother bushes and spent many years cultivating these plants. During the cultural revolution his work was destroyed but he kept working in secret and in the 1980's he cultivated his plants in Bei Dou Peak. This was the pinnacle of his achievements and since then plants have been propagated from these bushes.

This tea has become known as Bei Dou and we call it Lost Robe (original Da Hong Pao is called Big Red Robe). So, is this tea basically a Qi Dan which has been hybridised and changed by Yao Yue Ming or is the Bei Dou variety part of the six original Da Hong Pao mother plants? The answer is unclear but probably a bit of both. It is worth remembering that these ancient mother plants were grown from seed and therefore are not genetically identical so perhaps the 'pure' Da Hong Pao made hundreds of years ago are actually a blend after all!

Whatever the details, this tea is a direct descendent from the original Da Hong Pao mother plants.

Watch as my sister tries this tea and how it pairs with Dark Chocolate (skip to 17:30 for Lost Robe).

A 16 year aged ripe PuErh made from up to 150-year-old trees. Salted peanut butter on hotcakes with brown sugar and antique woods.