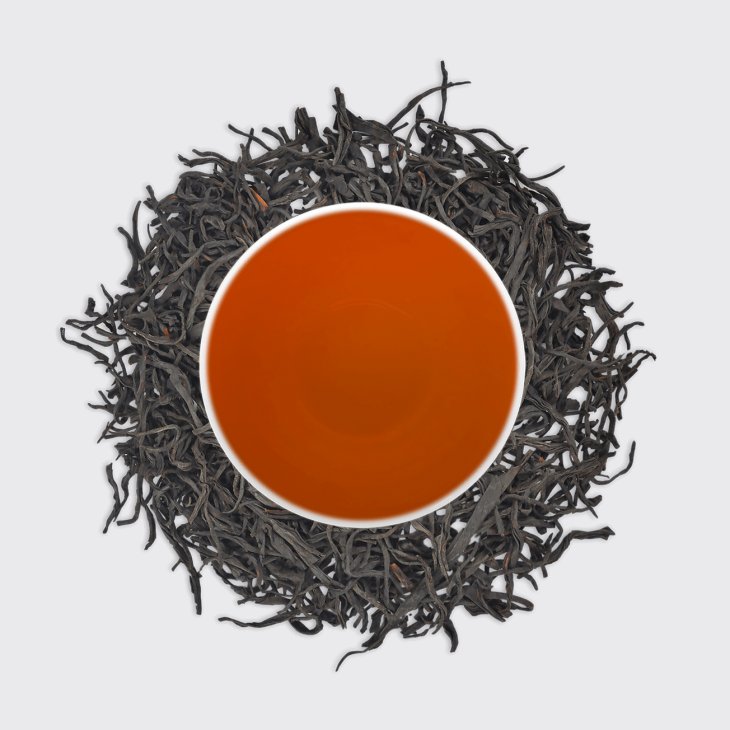 Tong Mu village is famed for having invented Black tea. Lapsang Souchong (a phonetic interpretation of the words Zhengshan Xiaozhong which means 'small leaf from Zhengshan') is supposedly the first commercially sold Black tea and was made in Tong Mu. The story goes that during the production of their Green tea, the Tong Mu villagers were forced to flee their homes when an army moved into the village. When they were able to return, the villager found that their tea had turned dark with oxidation and had an unusual aroma which they considered undesirable. So, some of the villagers decided to smoke the tea over pinewood fires to mask the aroma.

The smoked tea was brought to market and when the sellers returned to Tong Mu they demanded more of the smoked tea because it was met with such appreciation. Black tea and smoked tea was born and the love affair with smoky Lapsang Souchong continued for hundreds of years. Then, in around 2005 the market began changing. The Tong Mu area began switching to produce unsmoked Black tea. This was probably as a direct result of the success and high prices commanded by the newly created Jin Jun Mei  Black tea.

Suddenly the fabulous terroir of Tong Mu was shifted into incredibly fruity or chocolatey unsmoked Lapsangs (these are must try Black teas like Little Tong Mu and Souchong Liquor). The smoked tea was produced less and most of the smoked Lapsangs that have been available over the past decade has been from cheaper and lower quality areas with an excessively harsh smoke aroma. We have not stocked a smoked Lapsang for over two years because of this poor quality tea.

This tea is ORIGINAL Tong Mu smoked Lapsang, made with top quality leaves and smoked with skill. The wood used is a fruit wood (Longan) which adds a sweet and fruity note to the tea and the smoke is warming, comforting and enticing rather than harsh, acrid and overpowering - we are so happy to finally taste a true smoked Lapsang after many years and if you take a look at the tasting notes on this page you can see how deliciously complex its flavour profile.

So, if you already love smoked tea then dive in, and if you are yet to be convinced then this is one to try so that you can experience a truly classic version of this historic tea.