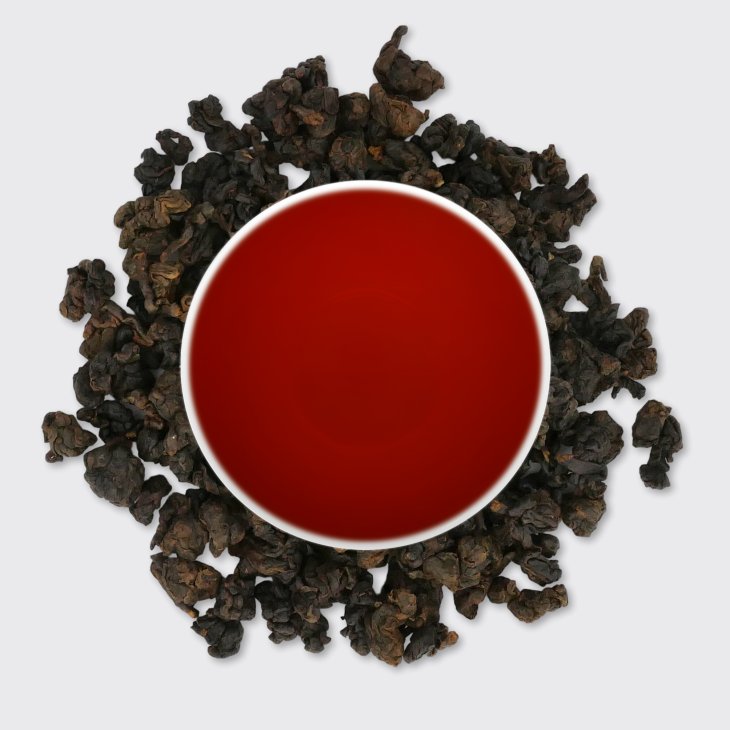 At Mei Leaf we have a bit of an obsession with Ruby Gaba.

Made from the Ruby 18 cultivar (the same cultivar used to make Ruby Black), this tea has such a unique flavour with roasted coconut, pine and eucalyptus.

But it is not solely the flavour that gets us a bit crazy for this tea - it's the effects. this is our strongest GABA tea and it feels more creative and uplifting than the others. This may be because the Ruby cultivar is made by crossing with an Assamica which always has a bit more of a buzz (one of the reasons we love Raw PuErh).

In order to be called GABA tea, the leaves must contain at least 150mg of GABA per 100g (normal oolong has about 6mg so that is 25 times higher). However, our Gabalong is laboratory tested and contains 205mg of GABA which is 35 times the amount found in normal tea. The farmers achieve this by alternating the leaves between air and a nitrogen rich environment (with no air) during the oxidation phase. This is done over a matter of hours and naturally increases the GABA levels in the tea leaves.

GABA stands for gamma-amino butyric acid, an amino acid that is one of the main neurotransmitters in your central nervous system. Neurotransmitters help nerve signals to travel between cells (neurons). The GABA chemical functions to prevent over-excitement of the nervous system by controlling the movement of signals between neurons.

GABA tea has an abundant amount of health benefits. Some would even describe GABA as a ‘super tea’. A recent study using our Amber GABA Oolong has shown that drinking this tea may be beneficial for people with Autism. Although this is a small feasibility study it certainly seemed to have given benefits and there is absolutely no harm in trying Amber GABA supplementation for adults or children with Autism Spectrum Condition (ASC).

ANTI-ANXIETY, DE-STRESS: GABA is a chemical that your body produces to keep the brain calm, control blood pressure and manage stress. High levels of GABA prevent an over-active nervous system by blocking excessive levels of nerve signal transmissions that cause anxiety-related health issues. Not enough GABA in your brain can lead to epilepsy, seizures, convulsions, Huntington’s disease and Parkinsonism.

ANTI-CANCER: GABA tea can inhibit the growth of cancer cells. In particular GABA has been studied for its ability to reduce airway-derived lung cancer.

LOWERS HIGH BLOOD PRESSURE: GABA is your body's own tranquilliser and is known for its role in lowering blood pressure. Please avoid if you suffer from hypotension.

PREVENTS DIABETES: GABA lowers blood sugar in your body by encouraging the production of insulin and secretion of insulin from the pancreas, preventing the risk of diabetes.

EFFECTIVE TREATMENT FOR NEUROLOGICAL DISORDERS: Daily consumption of GABA can be effective for neurological disorders.

STRONG IMMUNE SYSTEM: GABA improves the plasma concentration by helping your body to fight diseases and avert many health problems.

ANTI-AGEING: GABA tea can be used as a natural beauty supplement to prevent inflammation of the skin and improve skin elasticity, thus working as an anti-ageing agent.

HANGOVERS: Uses of GABA have included the treatment of alcohol related problems. It is great for relieving hangovers!

GROWTH: Gaba increases the production of human growth hormone (HGH) which is known to:

This is an area of controversy as conventional knowledge says that GABA taken in supplement form does not cross the blood-brain barrier. However, according to other studies and anecdotal evidence, this hypothesis has been called into question. It seems that GABA may cross into the brain or affect brain chemistry remotely by stimulating the enteric nervous system. The form of the GABA supplementation and the level of 'leakiness' of the blood-brain barrier may be important factors in determining the effects of GABA supplementation.

Captivating Black tea unlike any other tea available. Camphor, lilacs and menthol with cinnamon sweetness leading to a quenching minerality.